27-year-old Michaela Tineke Holst is studying a Master's degree in Innovation Management at SDC in Beijing. She is driven by the future possibility to help establish the best conditions and tools for entrepreneurs or to contribute with new ideas in large companies

"I think it is really exciting to be in a new culture and situations where I have no control," says 27-year-old Michaela Tineke Holst, who is studying a Master's degree in Innovation Management at SDC in Beijing.

Michaela already had an urge to travel when she started to explore different Master's programmes, and for a long time University of Lund in Sweden was one of her favorites. In spite of everything she decided to take the plunge and say goodbye to familiar Aalborg and along with 50 other Danish students go to Beijing in August 2014.

"Sweden would also have been a challenge, but in China I experience things that make me wonder or laugh every day. At least when I look back at the past situations," says Michaela and introduces the phrase "experience heap".

This is where she places all the more or less worth-while experiences. During the last five months the heap has already grown significantly faster than it would do in Aalborg. Michaela has a bachelor degree from Aalborg University.

The programme content was the main reason why Michaela decided to move to China for two years. She is driven by the future possibility to help establish the best conditions and tools for entrepreneurs or to contribute with new ideas in large companies.

Two years is a long time, when you are moving to the other side of the world, but the desire for China and the programme was greater than the fear of missing friends and family. And Michaela has never once regretted it.

Although China is far away it is a country that keeps appearing in lectures and Danish media, which makes it kind of familiar. In addition Michaela is travelling with a group of other Danish students. They met each other for the first time at an introduction seminar in Denmark before departure, and moreover both the Danish and the Chinese second-year students were ready to welcome them and give advice, as soon as they arrived in Beijing.

In the Innovation Management class Michaela study together with 16 Chinese and 11 Danish students, and the differences in culture are noticeable. She clearly remembers the first time she participated in group work with a Chinese male student. It was against his norms to discuss and sometimes even agree with the Danish girls because they were female.

"We all learn from each other, but since we are in China, of course it will be mostly us who will adapt to new culture and norms. However I can feel that the Chinese students also slowly adopt some of our behavior. In the beginning they looked up every single word in a translator app before they said it loud in English. Today they talk and make mistakes just like we do. For myself I have become more patient, as I have found out that not everything in China works as efficiently as in Denmark," says Michaela. 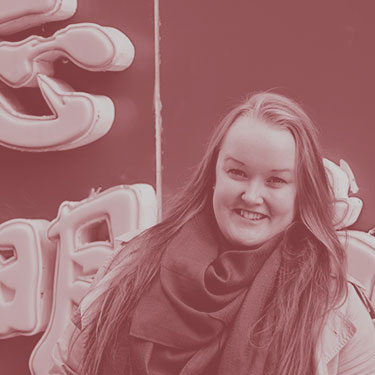 The Danish students quickly found out that in China the spare time is activity-based. For instance it has taken some time for the Chinese students to get use to the fact that the Danish students like to spend Friday afternoon sitting together, drinking a beer without other plans for the afternoon.

In order to have some bonding experiences concerts, ballet performances, basketball and even karaoke have become a part of the spare time for many of the Danish students. Also the bar street in the Wudaokou district is visited regularly by the students.

SDC offers Chinese language courses to all the Danish students. This is an optional offer and not a mandatory part of any of the Master's programmes, but Michaela had beforehand decided to learn Chinese and signed up for the weekly lessons.

"I do not have a good ear for language, and after some time I realized that the course probably was a bit too difficult for me. Instead I have decided to learn one new character and pronunciation every day. I use a teaching book and a computer program, and so far it works fine," she says.

Michaela expected the curriculum to be a greater burden than it was on her bachelor programme, and she was right. But it is exciting, and she does not mind to spend a lot of time studying at her writing desk in the dorm room she shares with the Neuroscience and Neuroimaging student Laura.

"It is really cool to stay in a shared dorm room - and cheap. Some years ago I went away to a continuation school and later a folk high school. Staying at the dorm here in Beijing with all the other SDC students is a very similar experience to those two experiences. I really enjoy the community we have among the Danish and Chinese students here," she says.