Working with state of the art equipment

Neuroscience & Neuroimaging student Malte Laustsen spends most of his days working on his master’s thesis at The Institute of Biophysics in Beijing. There he regularly works with a 7 Tesla Scanner. A state of the art piece of equipment that students like him would likely not have access to if he had done his degree in Denmark, says Malte Laustsen

Malte Laustsen has studied Neuroscience & Neuroimaging at Sino-Danish Center since September 2014. At the moment he is busy with his thesis, which he is supposed to hand in at the end of June 2016. Malte Laustsen is particularly interested in neuroimaging, and his project revolves around creating better images for use in research with an image capturing technique called Functional Magnetic Resonance Imaging (FMRI).

He spends his days programming and testing sequences on a 7 Tesla Scanner at The Institute of Biophysics in Beijing, a rare and expensive piece of equipment of which one was recently introduced in Copenhagen, the first of its kind in Denmark.

"It is great to have access to some incredible equipment that I would likely not have at home. For instance I can book the 7 Tesla scanner and be able to work with it within a couple of days," says the 24 year old student.

A sequence is a set of instructions you give to a scanner, which tells it how to take pictures of the human brain. For instance at what speeds, timings, and angles it should take pictures. This ultimately determines what the picture will look like and what kinds of tissues will be visible in the picture.

"By modifying an existing sequence I hope to be able to make the scanner create less distorted and higher resolution images, or images taken at a faster interval. This can be used to map changes in blood flow in the brain and give researchers another tool for better understanding how the brain works," says Malte Laustsen.

"Often I forget that I am in China"

Malte Laustsen has been in China since 2014, and he has gotten quite used to his life, which is not too different from his life in Denmark.

"Often I forget that I am in China. On a normal day I will buy some breakfast and take the bus to the institute, where I work on my project, have lunch with a classmate from SDC before I go home and hang out with friends. We also go out on the weekends, so it is actually quite similar to being in Denmark."

However, the courses at Sino-Danish Center are structured in a different way than Malte was used to from his bachelor at The Technical University of Denmark (DTU). The courses are short intensive modules, and the teachers fly in from different parts of Denmark and China. That means that the students will face many different teachers during a semester at SDC. 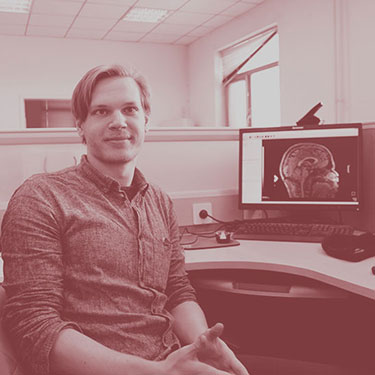 "For me it has been great to meet and learn from teachers from different Danish and Chinese universities, and also some of my favorite teachers from DTU teach at SDC. Because we are a small class, we have gotten closer to our teachers than we otherwise would have and been able to build some personal relations that might be helpful in the future," says Malte Laustsen.

In October Malte will hand in his thesis and begin his life after the university. At the moment he does not yet know what his career path will look like, but he has some ideas.

"It would be interesting to work with research and development at one of the companies that make scanners like the one I am currently using, for instance Phillips or Siemens. They could surely use someone like me. Or maybe I will stay within the university community. The former graduates from my programme I have talked to have had success in finding PhD positions, so maybe I will do that."

Facts about the 7 Tesla scanner