“MSc in Neuroscience and Neuroimaging”. These five words were enough to arouse 28-year-old Yanhua Xu’s curiosity as she immediately could see the connecting thread that would run through her education and research

Before starting her Master's programme at SDC she studied at China Agricultural University. She was part of a special honour programme which only accepts 50 students a year. In 2014 she graduated from SDC, but she still studies to get her Chinese Master degree which normally takes three years to achieve.

Yanhua Xu is the first SDC student from Neuroscience and Neuroimaging who is doing parts of her studies in Denmark. Her project is about drug addiction, and in collaboration with her Danish and Chinese supervisor she realized that it would be beneficial to conduct a part of her research in Denmark. In Aarhus she has set up the behavior model and carried out the scanning, while she does the rest in China for her Chinese Master's degree.
Yanhua Xu explains that it has been a new and great experience to work in Danish laboratories.

"The facilities are really great, and everything is well organized. I am used to be rather dependent on colleagues to be able to work in laboratories. Normally it can be difficult to get access to the right equipment and find out how to dispose laboratory waste, but in Denmark I have almost been able to work with minimum supervision from day one because everything is well organized".

Built up a great network

During her stay Yanhua Xu has stayed with her Danish boyfriend, who is a former SDC student. All in all the time in Denmark has made it possibly for her to spend time with former SDC students, researchers and altogether maintain her Danish network.
During the last two years she has built up a great network among the SDC students, and she got to know the Danes well. In Beijing she traveled to the mountains together with some of the Danish students, and she tells that the Danish girls also introduced 'Ladies night out'. For many of the Chinese girls it was the first time ever they went to a bar.
However, the differences in culture were significant during their sparetime.

"The Danish Students have a lot of planned activities after school, for instance they go to the gym or a bar or play football. I think the Chinese students are more spontaneous and after school we tend to hang out with the people we work with in the laboratories," says Yanhua Xu.

Also in the classroom the differences in culture were significant.

"It is clearly that the Danes are better at English than most of the Chinese students. I think the English lessons in China are a bit bizarre as we get a lot of training in reading and writing but we rarely speak the language. Most films and tv-series are dubbed, but the internet has made it easier to become familiar with the English language," says Yanhua Xu. 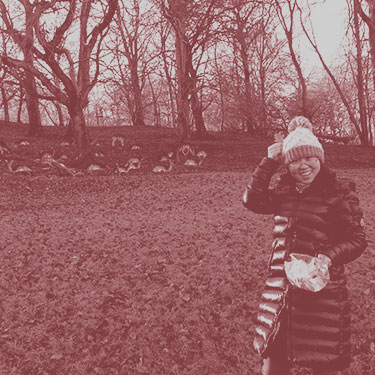 In the beginning she found it very challenging to understand the teachers, and she tells that many of her fellow students recorded the lessons to hear it one more time. After 3-4 months it became relatively easy, and the Danish teachers kept encouraging the students to speak up and forget the fear of making mistakes by asking 'stupid' questions.
Studying at SDC has given Yanhua Xu a first-hand experience of the Danish and Chinese teaching methods.

"The Danish teachers expect us to engage in the teaching, and it is not just a saying. It is really the way it is. Discussions among the students and questions for the teachers are common. It is a contrast to the Chinese teaching where the teachers do not leave time for questions, and most of the students have the impression that they are disturbing if they ask a question or give a comment during the teaching," says Yanhua Xu.

She likes the Danish way of teaching even though it has been a bit confusing to get used to. But she emphasizes that both ways of teaching have advantages. Especially, the way Chinese teachers motivate each student to constantly improve attracts her. Group work, group examiniation etc. are not that common in China, even though students tend to help each other out in their own time.

Looking back at the last two years Yanhua Xu explains that she has learnt a lot more than the obvious academic lessons. She describes herself as a much more confident and better communicator in English than she was before her studies. By visiting Denmark and working close together with Danes, she has seen life from another perspective. She got the chance to compare the Danish and Chinese way of living and studying, and it has made her appreciate what she already got back in China.

"I really value the beautiful landscapes in China, the food and most of all, the way Chinese people interact with each other. We are very close in the family, between friends and at work with our colleagues," she says.

In the future she hopes to work with psychiatric disorders and that she somehow can combine Denmark and China - both in private and business life.