’Male and female mice respond differently to awake MRI (Magnetic Resonance Imaging). It is important that we take this knowledge into consideration when designing awake MRI studies in the future,’ says SDC PhD student Thomas Beck Lindhardt from Aarhus University.

He recently published his first article in the peer-reviewed journal ‘Frontiers in Neuroscience’. Together with his Danish and Chinese supervisors and a colleague, he has examined physiological and behavioural responses in male and female mice for awake MRI habituation, that is required for awake MRI.

Eliminating the disturbing factors
Preclinical MRI is an important neuroscience tool for researchers when they work to solve the mystery of the brain, and in a wider perspective to e.g., create and test potential drugs for new medicine. Although the human brain shares many similarities with the mouse brain, results acquired from mouse MRI cannot be directly applied to humans.

First, animal MRI is typically conducted using anaesthesia as a mean to immobilize the animals inside the scanner, whereas in human MRI, anaesthesia is not necessary because you can simply tell the human patients to lie still. However, anaesthesia disturbs normal brain function thus making comparisons of MRI results from animals to humans more problematic.

Second, many researchers tend to focus on male animals only because they fear for biological variance e.g., hormone fluctuations from female estrous cycle. However, generalization of data obtained from single sex animals to humans of both sex is also similarly problematic. Therefore, to increase the translational capability of preclinical research it is important to strive to eliminate as many confounding factors as possible in the comparison of the animal and human brains.

Studying the awake brain using both male and female mice – why?
Traditionally, animal MRI have been performed in anesthetized animals, but during the last 20-30 years, researchers have worked to develop methods that makes it possible to conduct MRI using fully conscious animals. Thereby, researchers have gained the ability to study the animal brain in its natural working state, free of the confounds of anaesthesia. However, awake animal MRI is not without caveats. Because anaesthesia is not used for immobilization, animals need to be mechanically restrained and while animals are awake, they are also exposed to the loud MRI noise, all of which is very stressful to the animal.

‘You cannot tell an animal to remain calm and ensure them that the MRI is harmless, so before we can conduct awake MRI, we have to habituate the mice to the setup by gradually introducing them to the stressful components which takes several days’ says Thomas beck Lindhardt. 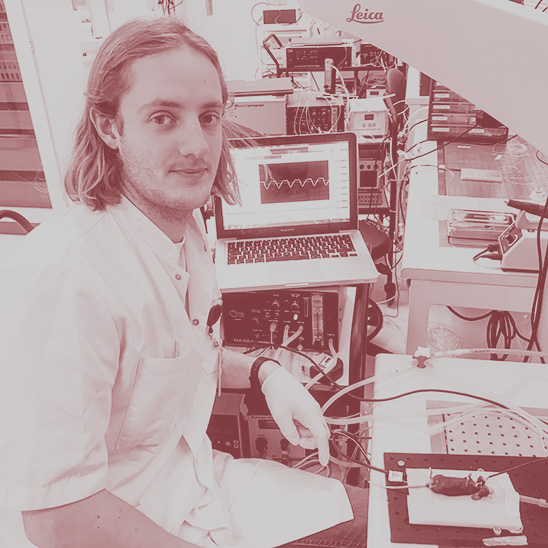 In their study Thomas and colleagues developed an experimental setup that could be used habituate mice for awake mouse MRI. To ensure that animals were not stressed, the researchers monitored the hearth rate, grimaces, and stress hormones of the male and female mice during the MRI habituation procedure.

‘We found out that after several days of MRI habituation mice exhibited physiological and behavioural responses similar to resting state, indicating that mice are compliant to MRI habituation. However, we also discovered that male and female mice differ in their response to awake MRI habituation,’ says Thomas beck Lindhardt.

‘Our article emphasises how important it is to take the sex into consideration when conducting awake MRI,’ says Thomas Beck Lindhardt.