New opportunities within education, research and industry in China

Press release
When His Royal Highness The Crown Prince inaugurates the House of the Danish Industry Foundation in Beijing, China, on 25 September, it is a house full of new opportunities within Danish education, research and industry that opens up.

The construction of the building is funded by the Danish Industry Foundation, and it will become the focal point of researchers as well as Danish and Chinese students once the Danish-Chinese university partnership, the Sino-Danish Center for Education and Research (SDC), moves in. The house will also house companies and institutions from both countries, just as it will give Danish companies unique access to the large Chinese market.

SDC is the largest ever Danish venture within education and research outside national borders, and the House of the Danish Industry Foundation will become a unique framework for strengthening the Danish-Chinese university partnership.

‘China is a strategically important country to Denmark – not least within research, education and innovation. We have now been given an inspiring new framework for Danish and Chinese researchers and students to learn and develop good ideas. It provides both Danish students and companies with new perspectives’, says Minister for Higher Education and Science Søren Pind.

Since SDC launched its first master’s programmes in 2012, 150 students have been accepted into the pro-grammes each year, 50 of them from Danish universities. This gives Danish and Chinese companies access to graduates from both countries with an international perspective, a multi-cultural understanding and high pro-fessional competence.
Important Connection Between China and Denmark
The 11,000 square metres large building enables SDC to compile teaching and research activities under one roof.

The foundation has donated a total of DKK 99 million for the construction of the building, and the design is based on a project proposal by Danish Lundgaard & Tranberg Architects and COWI.

A building for all danes

Opening the doors of a Danish building in China is a landmark event. The house will be buzzing with activity and thus become an active display window for Danish companies and Danish architecture.

‘Denmark has a unique collaboration with China within education and research, and the new building clearly demonstrates that SDC has now become the institutional focal point of the collaboration. We are proud to have been able to make SDC one of the Chinese government’s preferred models of cooperation within just a few years. The amazing house is Danish, without a doubt, but SDC is neither Danish nor Chinese. It is a part-nership, which in the future will give both countries unique opportunities’, says the Danish SDC Director
Lauritz B. Holm-Nielsen. 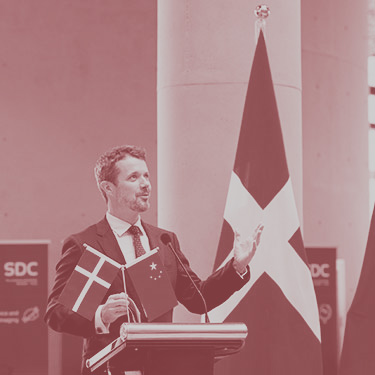 The Chinese partner university, the University of Chinese Academy of Sciences, has functioned as the developer, while the Danish Building and Property Agency and the Ministry of Higher Education and Science, among others, have supervised and quality-assured the construction work.

The art adorning the building is created by the internationally acclaimed artist Astrid Krogh and consists of a large curtain comprising 1,800 square metres of textile. The artwork is called ‘China Blue’ and is found in the main auditorium. The artwork is donated by the New Carlsberg Foundation.
Sino-Danish Center for Education and Research
The partnership centres around six fields of research, which frame the seven master’s programmes, the PhD research and the individual industry partnerships.

All graduates may obtain a double degree from both the University of Chinese Academy of Sciences and one of the Danish partner universities.

The partners are the eight Danish universities, the Danish Ministry of Higher Education and Science, the Chinese Academy of Sci-ences and the University of Chinese Academy of Sciences. The partnership is equally funded by Denmark and China.
Contact
For comments from Minister for Higher Education and Science Søren Pind, please contact Press Secretary Jakob Sejr Teichert, phone: +45 7231 9503, email: jte@ufm.dk.


For comments from Chairman of the Board of the Danish Industry Foundation Sten Scheibye or photos from the inauguration, please contact Head of Communications Ole Østrup, mobile: +45 2380 0660, email: oos@industriensfond.dk.

Please download the media kit (available in English and Danish) for more information about the partnership, the House of the Danish Industry Foundation, the interior building design and furnishing, and the artwork in the building.

The House of the Danish Industry Foundation, in English

Danish design on all floors, in English

The artwork China Blue, in English

The House of the Danish Industry Foundation, in Danish

Danish design on all floors, in Danish

The artwork China Blue, in Danish