The Danish company Grundfos has played an important role in 25-year-old Tim Roiy Andersen’s education. However, the collaboration with the Danish-owned company from northern Jutland did not take its beginning until he traveled to the other side of the world

Tim studies a Master's degree in Innovation Management at SDC in Beijing. A programme he was attracted to because of his general interest in China and a dream that involved dealing with Asia-related issues in his future professional career.

"I have a BSc in Business Administration and Commercial Law, but when I started at the Master's degree I found out that it was not my vocation. Large companies' often has a strategy for the Chinese market, and furthermore China has a much higher growth rate than Denmark does. All together this makes Asia a very interesting market to deal with in the future," says Tim, who has had an interest in China during the last five years.
Joint effort with Chinese fellow student

As an integrated part of Innovation Management all students have the opportunity to do an internship, and Tim got a foot in the door at Grundfos through a job advertisement passed on by his supervisor. At SDC Danes and Chinese study together, and Tim and a fellow Chinese student both got an internship at Grundfos.

"I knew that we were going to work closely together, and I was very excited about it. The collaboration went beyond all expectations, and it was a great eye opener to work side by side with Chen Hongcun. The company culture is very Danish, and we worked together with many Danish employees situated in Denmark, but most of our colleagues at the office in China were Chinese. This made me very conscious about the cultural differences," he says.

Tim worked at Grundfos' Research and Development Department in Suzhou (near Shanghai) for four months. The two students conducted an organizational analysis aiming to strengthen the internal organization by implementing a horizontal organizational structure.
Tim describes it as very educational to be a part of a cross-border project. He had a close collaboration with Hongcun, an everyday life with Chinese colleagues, collaboration partners in Denmark and worked in a global company where Danish and Chinese cultures met every single day. Therefore Tim was very determined to do his Master's degree for Grundfos if the possibility came up.

During his stay in China he has experienced how important a great network is, especially when it comes to get your foot in the door at the international companies in Asia. After an active effort Tim succeeded and through his master's thesis he now has the opportunity to get to know Grundfos from a new perspective. 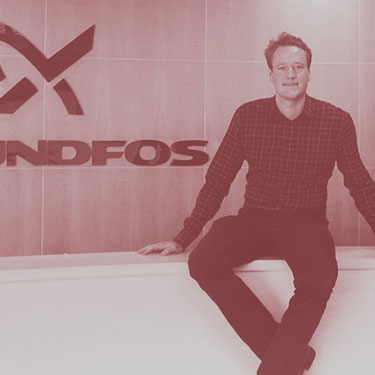 The project has been derived from Grundfos' new strategies for China and global. The focus is to create a closer collaboration between the Chinese Sales Department and Business Development Department in order to adjust future projects even more to the Chinese market.

"It is a great advantage that I already know the company and have an internal network. Fortunately the work culture in Grundfos is supportive. It is okay to be a raw employee, learn and absorb knowledge," says Tim, who at the moment is working in Shanghai at the Business Development Department.

Tim expects to submit his master's thesis in June, and afterwards he hopes to join a Graduate Programme in order to get to know an international company from more than just one position. Previously Tim has worked in a small company in Denmark, and even though it also has certain advantages, he has realized the opportunities in large companies.

"When you are newly qualified it is great to have many colleagues with different competences to learn from. Working in a global company also provides you with the opportunity to deal with several different markets," says Tim.

Asked if he has plans about living abroad in the future, he is in two minds about it. On one hand he clearly enjoys the experiences and the pulse when living abroad. On the other hand family and friends are far away and a base in Denmark would not to be sniffed at. At the moment he has decided to take one day at a time and enjoy the positive challenges by living and studying in China.