I can learn from the best

SDC PhD Cecilie Christensen is working on improving the quality of barley at her laboratory in Beijing. “It is imperative for me to do part of my PhD in China, simply so I can learn from the best” she says

Danish SDC-PhD Cecilie Christensen, who works at the Department of Plant and Environmental Sciences at Copenhagen University, is currently doing a large part of her thesis research at the laboratory in Beijing. The lab where Cecilie Christensen is carrying out her experiments is one of the most successful labs in the world working with the gene editing modification technique called CRISPR/Cas9.

Working with gene editing modification in barley can potentially help combat two global issues.
Firstly, barley straws contain sugars that can be converted into bioethanol, which can be used as a substitute for gasoline. The problem, however, is that those sugars are tightly bound by lignin, which makes it difficult and expensive to release. Therefore Cecilie Christensen is attempting to soften the lignin, thereby making the sugars more easily released and ultimately improving bioethanol production.

"To improve bioethanol production is a major contribution towards replacing fossil fuels and thereby decreasing levels of CO2 emissions that are strongly connected to global warming, is a major achievement for me," says Cecilie Christensen.

Secondly, Cecilie Christensen will also try to improve the grain quality by altering the starch composition. Starch is composed by amylose and amylopectin and grains with high amounts of amylose (>35 %), which is considered healthy and is an important food source for people with diabetes, obesity and other nutritional related diseases. In her PhD she will try to lower the amount of amylopectin and thereby increase the grain quality for human consumption.

"It is truly exciting to work in a field where I have the possibility to contribute to a solution to two global problems." 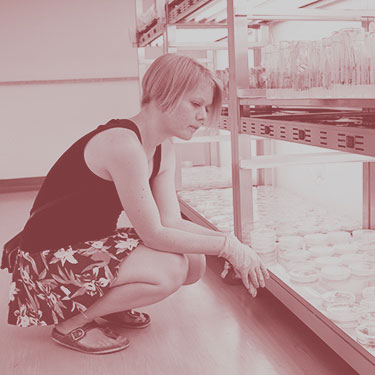 The DNA sequence that is used to target the specific gene in the plants has been designed and the activity has been confirmed. The next step is to have the British company BRACT (Biotechnology Resources for Arable Crop Transformation) transform and return mutated barley plants in the spring. Subsequently Cecilie Christensen will check the seedlings for mutations and all the positive seedlings will be grown for seeds which will be planted and those plants will be examined for their desired trait.
Cecilie Christensen is thrilled to be working with some of the most competent scientists in Beijing and looks forward to sharing her experiences with her colleagues in Denmark.