The House Of The Industry Foundation will be the central hub for all activities at SDC when the construction of the building is completed. When Her Majesty the Queen Margrethe II broke ground for SDC's new building in Beijing, it was an important milestone for the unique Sino-Danish initiative within education and research.

The ceremony was a testimony of the strong and longstanding relationship between China and Denmark within education and research. Her Majesty the Queen, the Danish Minister of Higher Education and Science, Ms. Sofie Carsten Nielsen, President of Chinese Academy of Sciences, Mr Bai Chunli and the Chairman of The Danish Industry Foundation Sten Scheibye, attended the event. SDC's Chinese and Danish students and teachers were also part of the ceremony and were eager to break ground for their new building.

Since SDC opened up for enrolment in 2012, approximately 250 students from China and Denmark have begun their education at the center. The students got a chance to meet the Queen and the Danish minister and many of them also took the opportunity to break ground for the building.

The students play a key role in future Sino-Danish relations as they are exposed to the best education, research environments and different cultures from both countries. SDC offers a unique experience and opportunity for Danish and Chinese students and will play a key role in shaping a unique talent pool for companies from Denmark, China and the rest of the world. When SDC is fully developed, 100 researchers, 75 Ph.D. students and 3-400 Master's students will be affiliated with the center. 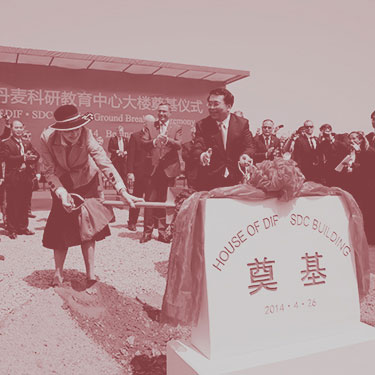 "The House of The Danish Industry Foundation is an integral part of Sino-Danish Center and I am very happy to see the construction commence. The presence of Her Majesty the Queen and President of Chinese Academy of Sciences, Mr. Bai Chunli for the ground-breaking ceremony, is an honor for the center and illustrates that the SDC project is highly valued by both Denmark and China. The House of The Industry Foundation will not only serve as strong visual symbol of the academic activities of the SDC but will also be a display window for Danish technologies in China. It will provide a hub for students, researchers and interested companies and stand as a symbol of Sino-Danish friendship and collaboration", says Lauritz B. Holm-Nielsen.

Chairman of The Danish Industry Foundation Sten Scheibye states that the new building will strengthen the relations between the Danish industry and the activities at Sino-Danish Center:

"The Foundation hopes that the Danish business community will become actively involved in the life in and around The House Of The Danish Industry Foundation in China. This will ensure a close connection between the individual company and the university and provide the company with access to new knowledge, technology and highly educated graduates. This can support the general safeguarding of Danish companies' interests in the Chinese market", says Sten Scheibye.