Finding the right chemistry in China

Frederikke Zilstorff is studying at the Sino-Danish Center in Beijing and it isn’t boring: Chemical Engineering and cultural crossings are the foundations of an academic and amazing stay in China.

“Staying in Denmark seemed, in a way, too easy. Something had to happen!”

The reason for taking her Master’s degree in Chemical and Biochemical Engineering at SDC in Beijing was as simple and clear as that for Danish Frederikke Zilstorff. At the moment she is in Denmark where she has been participating in Summer University at DTU Chemical Engineering’s Pilot Plant but will soon be returning for her last semester in the East.

According to Frederikke, the Danish-Chinese collaboration yields a “double benefit”:

“Academically, the degree is of the same quality as it is would be at DTU. But I also get much more than that: A lot of personal experiences, of course, but also a lot of Chinese class mates as well as the opportunity to build an international network,” she says.

Furthermore, a closer contact with the professors means a lot to Frederikke:

“It has been a huge advantage to have a more personal connection with the professors at SDC. As a student, you’re not just one face out of 80 in a lecture hall but can always come and ask for help or advice, also after the end of class, and the students and professors often have lunch together. This wasn’t something I expected but I have valued it a lot.”

According to Frederikke, SDC supports the Danish students in settling in at a Chinese educational institution and everyday life and the students also help each other to find out what’s what in Chinese culture and society. But with some things there is nothing else to do but to throw yourself at it with an open mind. It’s about trial and error. 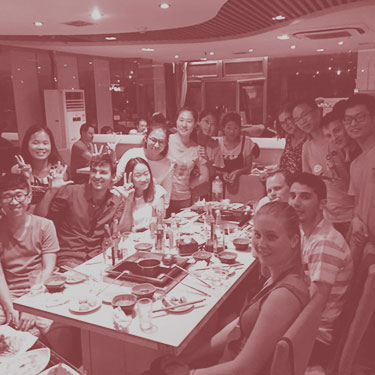 “For example, it can be challenging to be creating a social unity in the class because a lot of the Chinese students already have friends and family close to them. Some of us Danes have found out that it’s important to take initiatives and invite them out for hot pot, badminton or to various discursions. I think it’s all about finding out as you go along,” Frederikke says.

And once you have befriended the locals, many interesting experiences follow:

“I celebrated Chinese New Year in a small village with one of my classmates’ family. It was a lot of fun experiencing and participating in their traditions. The atmosphere is very special. I was also taught how to make dumplings. The family had a great time showing us how to fold them even though none of them spoke any English – it was all visual learning with hand gestures.”

Read the full article by Frederik Appel Olsen on dtu.dk.