Drawn to Denmark and China by his interest in water

1 PhD thesis, 1 best student poster at the international ”Shallow Lakes World Conference” and 10 scientific articles (6 being the first author). These are some of the 30 year old SDC PhD student Ivan Gonzalez Bergonzoni’s achievements when he in December hands in his PhD

Ivan had lived all his life in Uruguay, when he in 2011 received a master's degree and decided to accept a PhD position at Aarhus University.

"I met my supervisor Professor Erik Jeppesen back in 2009, and he introduced me to the research team within lake and wetland ecology. When the call for the position was announced, and my wife said she was willing to move to Denmark, I had no doubt. First of all I really liked the topic of the PhD, and secondly I thought it was a great career opportunity," says Ivan.

He is one of the more than 70 SDC PhD students funded by the Danish SDC-Secretariat. Ivan is enrolled in Aarhus University, and because of the funding from SDC he is required to do research in China for at least six months during his PhD studies. First he was 6 months in Guangzhou, working in collaboration with Jinan University, and University of Chinese Academy of Sciences (UCAS). During this stay he did field sampling in 15 subtropical streams along natural and human impact gradients in Kaiping area. In 2013 he went back to China to collaborate with Nanjing Institute of Geography and Limnology, Chinese Academy of Sciences and also with a research team in ecology of aquatic insects from Department of Entomology, Nanjing Agricultural University. With this latter group he joined a field expedition sampling 35 tropical streams along human impact gradients in Xishuangbanna, Yunnan Province, aiming at studying stream food webs.

No Chinese assistance - no research

Ivan ended up spending one year in China, and it has been challenging but rewarding to carry out research in a country significantly different from both Uruguay and Denmark.

"It is impossible to do anything without assistance. Fortunately I got to work together with some researchers who helped me getting the right equipment, gave me advice about the logistic and put me in contact with master's and PhD students who were willing to help me sampling," Ivan explains.

He also had to make an effort to understand the Chinese culture. For instance it took some time before the Chinese PhD students accepted that he and they were equal, end even though their supervisors had asked them to help Ivan they were fully entitled to question his plans or come up with suggestions.

Despite the challenges he does not hesitate to describe China as one of the most interesting places to conduct research within his area of interest. China has a long history, a high population and the country's industrial boom means that the human impact of small river systems is very high.

"In the long run we can use the results to predict what consequences the human impact will have in other countries where natural systems with similar environmental conditions can be found," says Ivan. 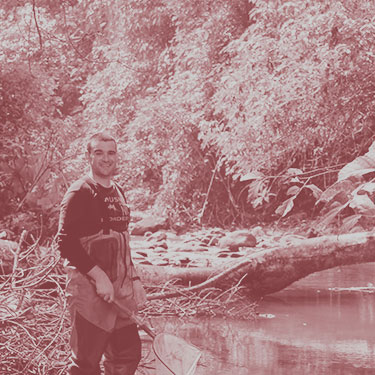 Obviously, Ivan has been busy and very productive during his PhD studies. A great network and close collaboration with partners are some of the keys to this. He emphasizes that he has had a great partnership with SDC PhD student Nicolas Vidal. He knew Nicolas from back home in Uruguay, and Nicolas had always been very supportive regarding his plans about moving to Denmark and doing research in China. When Nicolas also took up a position as SDC PhD student they found many ways of working together. They assisted each other in logistics and fieldwork but also in the ideas and planification of the studies, even though Nicolas' research is focused at lakes and Ivan is looking into streams. Additionally Ivan's wife, Cinthia has been essential as she brought support in many ways to Ivan, but also worked very hard along with him helping in the field samplings and laboratory sample processing all along the research conducted in China.

"Besides the great teamwork I have noticed that you overall have great working conditions in Denmark as everything is well-organized and planned. Of course I have also benefited from the fact that my PhD is the purpose of our stay, so I can be very focused," says Ivan.

To live and work abroad has never been a part of Ivan's future plans, but looking back he is determined that it was the right decision he made. He has been sampling in the tropical fields in Asia, he has got a unique experience in conducting research in very different places, he has attended high level scientific courses during his PhD and he is now able to put new scientific skills on his resume. If an opportunity had come up he would have loved to stay in Denmark, but by the end of the year he and his wife are leaving as he will attend a research project at Universidad de la Republica in Uruguay.