The Danish Prime Minister, Helle Thorning-Schmidt, was invited to give a speech at the opening ceremony. The Prime Minister arrived at UCAS' Zhongguancun campus, where she was greeted by the new Danish and Chinese SDC students. The eight Danish universities were also represented at the ceremony.

The president of both UCAS and CAS, Dr. Bai Chunli, presented a welcome speech. Dr. Bai Chunli stated that Helle Thorning-Schmidt was the third Danish Prime Minister who had visited UCAS as a part of the SDC project, signifying the importance of the project.

"High quality education gives our young generation, including all of you SDC-students, the strongest opportunities to prosper in society. Education remains critically important as we are continuously striving to boost our international competitiveness. Access to well-educated employees simply makes it more attractive to invest and create jobs in both China and Denmark. I find it particularly encouraging to see how the co-operation between China and Denmark is currently expanding. You are - all you new students of SDC - the epitome of this cooperation."

After the ceremony, Helle Thorning-Schmidt and President Bai Chunli spoke, and the students had a chance to ask questions to the Danish Prime Minister. 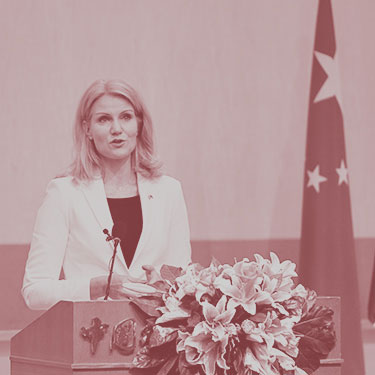