Celebrating the 10-Year anniversary of the first student cohort

10 years ago, 103 adventurous Danish and Chinese students challenged themselves to learning in a brand-new setting, when they became the first cohort to pursue their double master’s degrees through the Sino-Danish Center for Education and Research.

Former students, Heads of the educational programmes, board members and staff joined, when the 10th anniversary of the first cohort of SDC students was celebrated at the Embassy of China in Copenhagen.

Everything was different and chaotic
They all left their respective comfort zones and moved to Beijing to learn with and from each other through cultural differences, language gaps and academic interests.

One of the students who went to China to study Water and Environment at SDC in 2012 was Mette Schrøder Hansen, and for her it was a no-brainer to join the anniversary and reunite with former co-students.

‘This was a great opportunity to reconnect with friends I shared so many experiences with back then and when we caught up, it was clear that those two years shaped and meant a lot to all of us. It was a big decision and a big challenge to go to China, and when we got there, everything was different and chaotic. But I believe my experiences of adapting to life in China, working and communicating with different people in and outside the classroom helps me a lot in my work today,’ says Mette Schrøder Hansen, who works as a project manager with wastewater planning at Aarhus Municipality together with two projects in Ghana and South Africa. 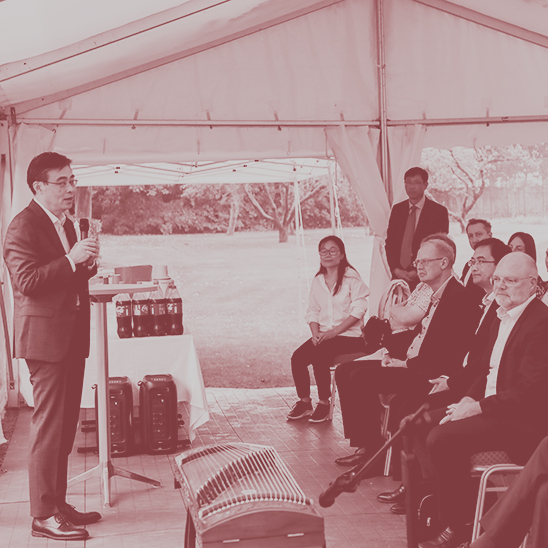 Among the keynote speakers was the Director General of the Danish Agency for Higher Education and Science, Hans Müller Pedersen, and he went out of his way to pay tribute to the first cohort.

‘You took a different path than so many other students. A path where Danish and Chinese excellence in higher education, science and innovation meet and lay the foundation for a valuable cooperation. I feel certain that the knowledge and experience that you all gained from being an SDC-student has equipped and enriched you in ways a Danish or a Chinese programme alone cannot provide,’ he said.

‘Important and remarkable results’
In his speech, the Chinese Ambassador to Denmark, Feng Tie, emphasized the importance of the close collaboration between Denmark and China. Hans Müller Pedersen also touched upon this point in his speech.

‘SDC is a cornerstone and a flagship project in Sino-Danish relations. This partnership adds value to both the Danish and Chinese societies through our collaboration on research, innovation and education across cultures and scientific strongholds. I am therefore proud of the mutually beneficial SDC-partnership between the eight Danish universities and the University of Chinese Academy of Sciences. Together the Sino-Danish partners have accomplished many important and remarkable results,’ said Hans Müller Pedersen.

Since the first cohort graduated in 2014, more than a thousand Danish, Chinese and international students have graduated from the joint master programmes and SDC has funded approximately 500 PhD’s since 2011.

Attendees from the 2012 cohort. Mette Schrøder 2nd from the left.