Søren Valsøe Hansen researched the microbial food safety of fat from the black soldier fly larvae to assess its potential as foodstuff, in his thesis.

‘The research we have thus far suggests that production of insects is much less harmful on the environment compared to for instance chicken, and as the population of the world is growing, why not add insects as another potential food source for people,’ ponders Søren Valsøe Hansen, who recently graduated from the International Food Quality and Health Master’s degree programme at SDC.

He was introduced to the topic of insects as a food source during the course Microbial Food Safety and Hygiene, which was taught by associate professor Jørgen Leisner from the University of Copenhagen. Thus, when coming up with a thesis project, he persuaded him to be his supervisor and he reached out to the company ENORM, which produces animal feed from black soldier fly larvae for a product to research.

‘What drives me is exploring new ideas and creating knowledge that is applicable to someone, so I was fortunate to find a topic that is quite unexplored and in ENORM I found a company that gave me relatively free reins and was interested in my results,’ says Søren Valsøe Hansen.

Describing the microbial composition
'Simply put, ENORM produces feed from the black soldier fly larvae by separating the solids, which is their primary product, from the liquids, which is more or less all oil, and so far, not much data is present on the chemical or microbial composition of this product. So I was thinking: Does this have potential as a food source?’ says Søren Valsøe Hansen.

Therefore, in his study, he aimed to describe the microbial and chemical safety of the fat. For this purpose, he carried out two different experiments at the University of Copenhagen. In one study, he assessed the microbial composition and growth of the product throughout a period of around 25 weeks using microbial enumeration techniques to count the organisms in the product (for example by using Plate Count Agar for the assessment of the aerobic, mesophilic count) as well as identification techniques to assess what exact species were present in the product (by using matrix assisted laser desorption ionization and 16s ribosomal RNA sequencing). The second study was a challenge trial, where he monitored the survival of an added culture of the human pathogen Salmonella in the product.

‘In the beginning, this was an explorative study, as there wasn’t much data to go off. However, I did successfully assess the microbial and chemical composition of the product, while also gaining an understanding of the survival of Salmonella in black soldier fly larvae oil. This is essential information, when considering the safety regarding its applicability in food products,’ says Søren Valsøe Hansen. 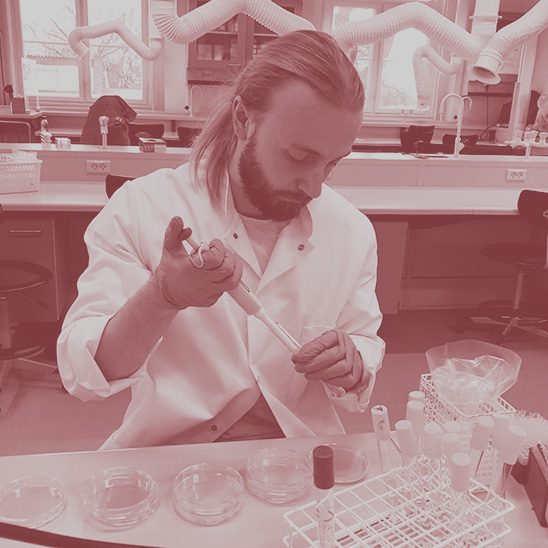 ‘When producing meat products such as beef, the animal goes through a degutting-process, where most of the bacteria are found - you can’t do that with insects, which emphasizes the importance of sufficient processing. My study, and other studies of similar nature, demonstrates the need for and importance of hygienic precautions and sufficient processing procedures in order to prevent microbial contamination of food from black soldier fly larvae fat during insect rearing and subsequent processing. It also proposes that it may be beneficial to reassess and validate current criteria for edible insects,’ he says.

Going forward, Søren Valsøe Hansen hopes to be able to continue researching the potential of insects in a PhD position.