SDC and a committee of objective experts have been working on an evaluation of the Danish contribution to SDC since the summer of 2015, and now the final report is done

The decision to conduct an external evaluation of the Danish side's contribution to the SDC was made at a board meeting in May 2015. Not long after, an International Assessment Committee (IAC) was commissioned, and since then a comprehensive survey was carried among SDC's teachers, researchers, master's students and PhD's.

The report was approved by the board of representatives in Beijing on June 24, and it concludes that SDC has been successful in establishing itself as setup that has the potential to create tremendous added value to the Danish and Chinese societies in the long run.

From project to institution
The Danish Executive Director of SDC, Lauritz B. Holm, expects to have the largest intake of students from the Danish side so far in August, when the next cohort of master's students goes to China.
In fact the evaluation report tells that 91 % of the current students would recommend their study programme to other students, and 96 % of the students believe the that the cultural aspects of taking a programme with a mix of Danish, international and Chinese students is of value to them.

"The report is complete, and the overall conclusions show that we have come a long way in a short space of time. Of course there are challenges we need to address along the way when creating a unique setup like the SDC, but we are ready to begin the next era of the history of the SDC. As specified in the report, we are no longer a project, but an institution." 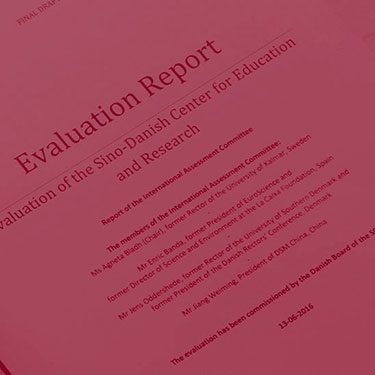